At a press briefing following the meeting, the Prime Minister said: “We have just inked a new Program for supporting e-governance and digital economy in Ukraine worth € 25 million. This is an important step for the development of cooperation in digital sphere.”

This Agreement was shaped with the participation of the Ministry of Digital Transformation of Ukraine. It was signed by Deputy Prime Minister for European and Euro-Atlantic Integration Dmytro Kuleba and EU Commissioner for Neighborhood and Enlargement Oliver Varhelyi. The funding will allow to enhance the efficiency and security of online public services provision, and improve access for citizens and businesses.

"Our goal  is to ensure 100% digitizing public services by 2024. We plan to digitalize  80% of the most demanded services this year. Digitalization not only makes public services convenient for citizens, but eradicates corruption, makes Ukrainian institutions stronger, ” the Head of Ukrainian Government said.

Prime Minister Oleksiy Honcharuk placed a special emphasis on the fact  that the Cabinet of Ministers under his leadership became the first ever Government of Ukraine to enshrine a clear goal in its Program: to meet the EU's economic criteria by 2024. He also drew attention to Ukraine's two key priorities for cooperation with the EU this year: the "industrial visa waiver" and the Common Aviation Area Agreement.

“Already in 2020, I personally count on quantum leap in two directions. Firstly, the "industrial visa free regime." We look forward to the arrival of a preliminary EU Assessment Mission to Ukraine to kick off  negotiations. Secondly, the Common Aviation Area Agreement, a breakthrough concerning which negotiations have become possible as a result of Brexit, ” the PM noted.

According to the Prime Minister, one of the topics of the meeting was the DCFTA review. Oleksiy Honcharuk stated: "The most important task is to bring the parameters of the Free Trade Area in line with the real trade structure between Ukraine and the EU, to further liberalize trade, to achieve a balance that will create better opportunities for both parties, and in particular for Ukrainian exporters in the EU."

The sides paid special attention to energy and environmental issues. "Ukraine aired a proposal to the European Union to launch a structured dialogue to work out the agenda under the European Green Deal," the Ukrainian Prime Minister said, adding that "by 2023 we plan to fully synchronize the Ukrainian energy system with the European Network of Transmission System Operators for Electricity (ENTSO-E).  This goal can only be achieved in close cooperation with the EU. "

Summing up, the Prime Minister stressed: “We are interested in increasing EU engagement in the development and implementation of reforms in Ukraine. At the same time, we also want greater access to EU markets and financial instruments. "

At the end of the meeting, Oleksiy Honcharuk commended active cooperation between Ukraine and the EU in preparation for the Ukraine Reform Conference, to be held on July 7 in Vilnius, Lithuania. 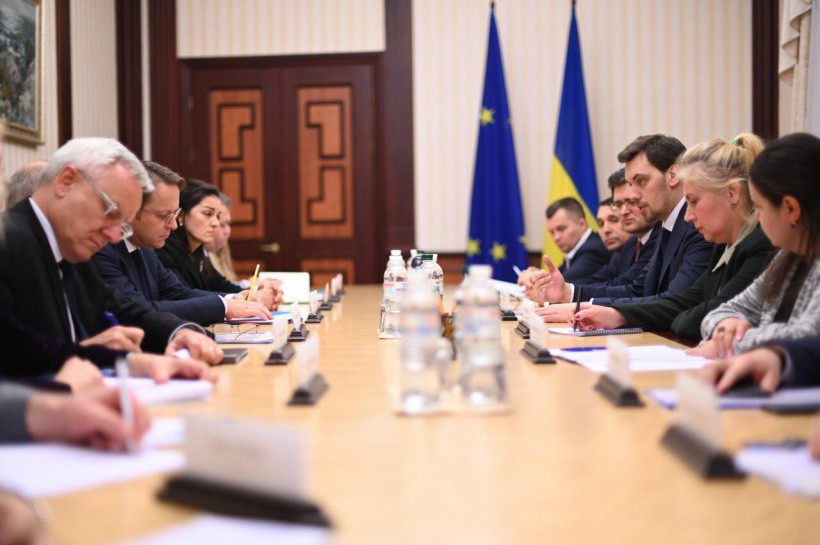