Trade facilitation, the Green Deal agenda and digitalization: what the Prime Minister talked about with the EU leadership in Brussels
Communications Department of the Secretariat of the CMU, posted 13 February 2021 12:55
European integration International activity Prime Minister
0

The Prime Minister of Ukraine Denys Shmyhal, as a head of a Ukrainian delegation, paid a working visit to Brussels, the Kingdom of Belgium, where he co-chaired the seventh meeting of the Ukraine-European Union Association Council. 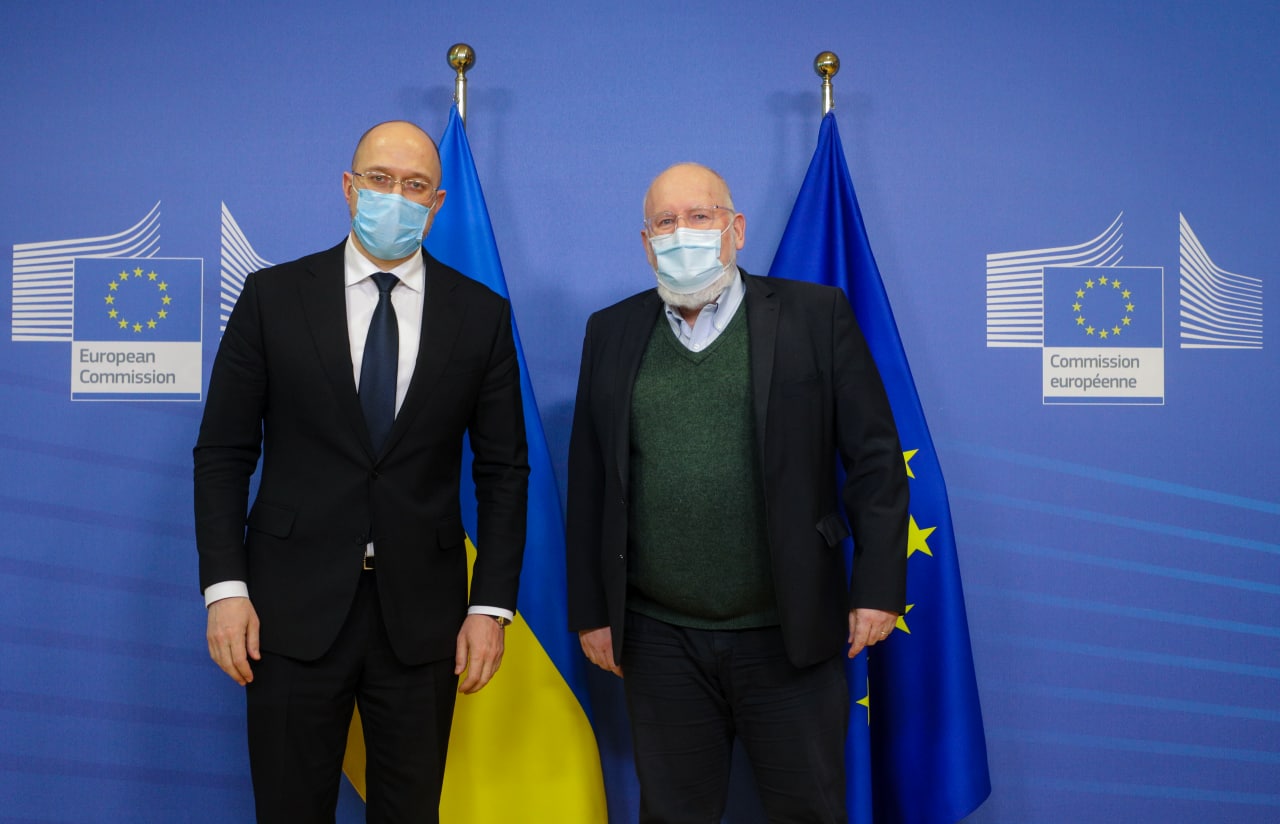 Denys Shmyhal stressed that Ukraine supports the EU's climate ambition, in particular the goal of achieving climate neutrality on the European continent by 2050.

"As a result of the launched dialogue - we have the ambition to develop a Ukrainian green course aimed at achieving climate neutrality. In this, Ukraine could use the EGD as a reference point," the Head of Government noted.

The parties also discussed strengthening bilateral cooperation on the transformation of coal regions. The Prime Minister noted that Ukraine had already commenced work on the Concept of reforming the coal industry and coal regions of Ukraine and the National Program for the Transformation of Coal Regions until 2027.

"We are working with the German Government on pilot projects. The Ukrainian Government has an understanding that the transformation process should be gradual, with the creation of new jobs and prospects for mining cities. We aim to ensure an inclusive and equitable transition," emphasized Denys Shmyhal.

Besides, the Prime Minister thanked the EU for providing financial support to improve energy efficiency in Ukraine. He said that the new draft National Action Plan for Energy Efficiency by 2030 provides for a reduction of final energy consumption by more than 17% compared to the projected normal consumption.

The Head of Government also highlighted that Ukraine has significant potential for clean energy production. In addition, Ukraine is determined in the EU Hydrogen Strategy as one of the EU's key partners in the production and supply of green hydrogen.

Cooperation between Ukraine and the EU in the digital sphere, cybersecurity and industry was tackled by the Prime Minister with the Executive Vice-President of the European Commission for a Europe fit for the Digital Age Margrethe Vestager on February 11. 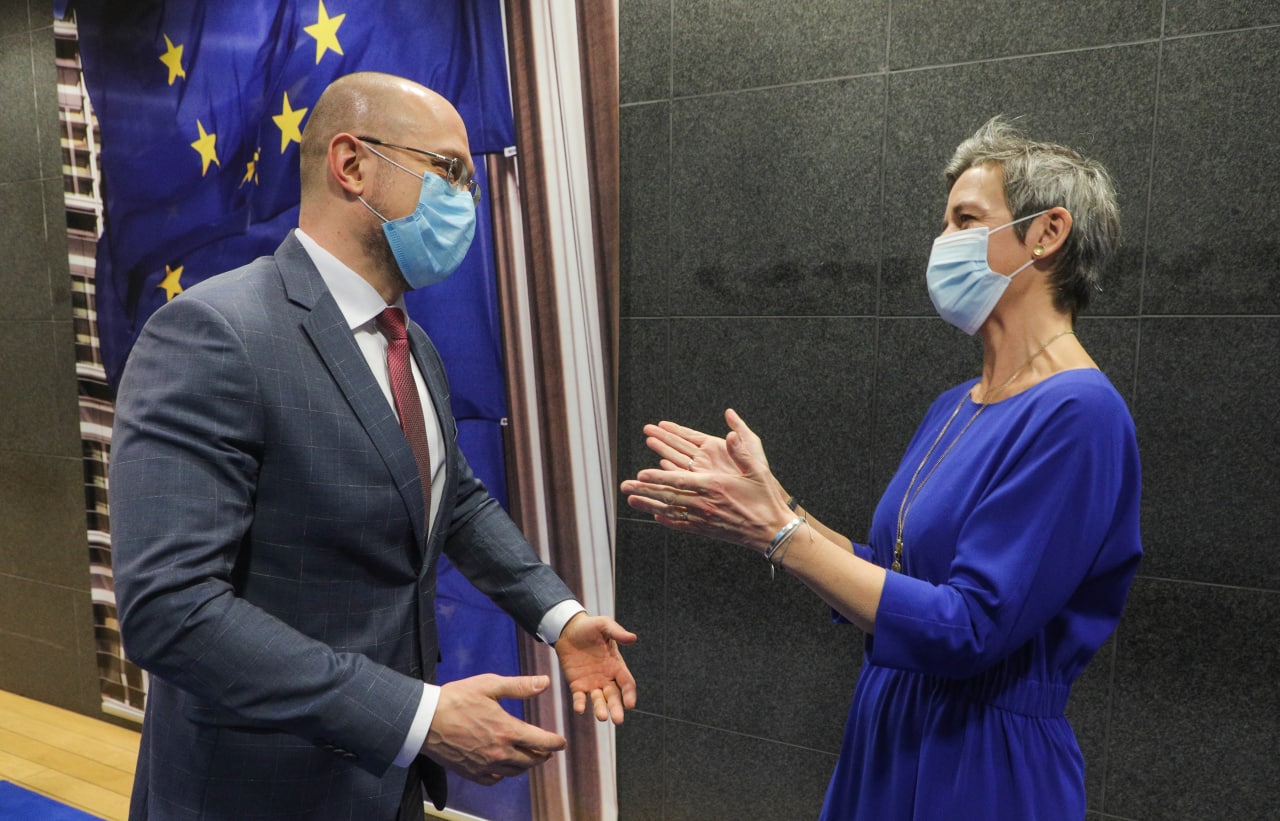 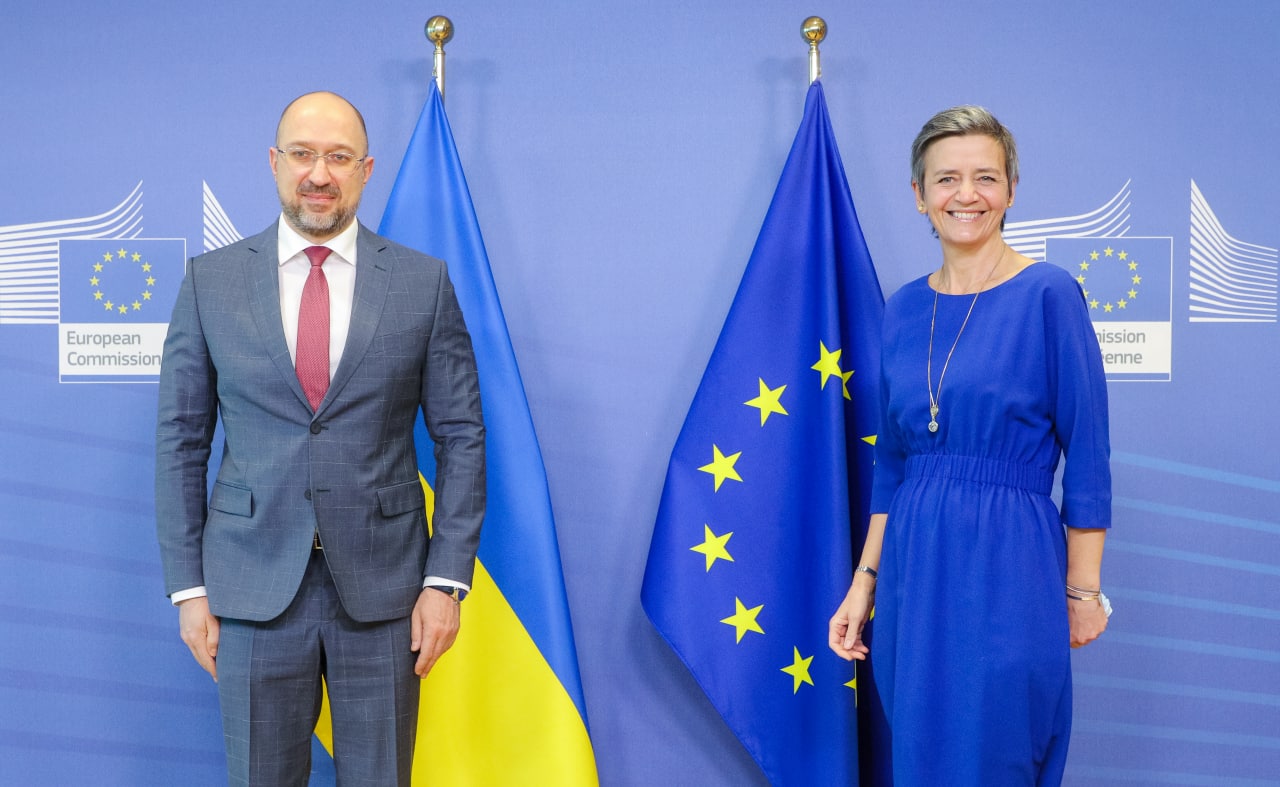 Denys Shmyhal stressed that the Government of Ukraine has been consistently working on digital transformation and thanked the European Commission for supporting government initiatives, in particular, promoting the development of e-government in Ukraine.

"Our goal is the integration of Ukraine into the EU Digital Single Market," the Prime Minister stressed.

Denys Shmyhal reminded of the accord to work in synergy on the Agreement on Mutual Recognition of Electronic Trust Services: "We have agreed on a relevant action plan. We count on its timely implementation and signing of the Agreement in the coming years."

During the conversation, the Prime Minister raised the issue of concluding the Agreement on Conformity Assessment and Acceptance of Industrial Products (ACAA), noting that this remains a strategic priority of Ukraine in cooperation with the EU.

The Head of Government thanked the EU for its efforts to organize an expert mission for the preliminary assessment of Ukraine's quality infrastructure. He added that the positive conclusions of the mission would provide an opportunity to transfer to the organization of an official EU assessment mission and ensure progress on the way towards the conclusion of the ACAA.

"We are striving to speed up the process of starting negotiations on the ACAA as it will help rebuild our economy in the post-pandemic period," said Denys Shmyhal.

Moreover, the Prime Minister of Ukraine and the Executive Vice-President of the European Commission talked over the launch of cyberdialogues in the first half of 2021 and high-level dialogues on space cooperation.

In addition, Denys Shmyhal welcomed the EU's intention to provide Ukraine, the first country outside the EU, with access to the Safety-of-Life navigation service for Ukrainian rescue services, airports and transport.

The Prime Minister discussed the launch of strategic cooperation between Ukraine and the EU in the raw materials sector, on February 11, with the Vice-President of the EC for Inter-Institutional Relations and Foresight Maroš Šefčovič. Denys Shmyhal supported the idea of adopting a Memorandum of Understanding on a strategic partnership between Ukraine and the EU in the raw materials sector during Maroš Šefčovič's visit to Ukraine in May this year.

During the conversation, the Prime Minister also noted the special role of the European Raw Materials Alliance (ERMA) and the European Battery Alliance (EBA), which are effective platforms for establishing cooperation between various stakeholders in the field of minerals and finished products.

For his part, Maroš Šefčovič stressed the importance of establishing cooperation in the raw materials sector and noted that the European Union would increase funding for the technical assistance program for Ukraine by EUR 800 thousand.

Prime Minister: EIB will disburse EUR 50 million for the purchase of vaccines for the population of Ukraine