Draft law on the circulation of agricultural land protects national interests of Ukraine
Communications Department of the Secretariat of the CMU, posted 13 January 2020 17:39
Land and agricultural sector
0

On January 13, the final version of the  draft law on the circulation of agricultural land №2178-10 was discussed publicly. During the event, the representatives of the Government, lawmakers of the "Servant of the People" faction, of the Agrarian Committee of the Verkhovna Rada briefed attendees on the proposed amendments to the bill.

The bill encapsulates all amendments of market participants and civil society. The draft law took into account both the interests of Ukrainian citizens and national security of Ukraine, so it can be considered as a victory for public dialogue and civic consensus.

Today, there are only a few countries in the world that have a moratorium on agricultural land sales - Cuba, North Korea, Venezuela, Congo, Tajikistan and Ukraine. Removing this restriction will allow land owners to actually exercise their legal right to dispose of it and to establish European, fair and transparent rules of the game in the market. The Ukrainian farmer will receive opportunities and incentives for development in the form of state support.

The final version of the bill envisages that access for foreigners to the land market  will be possible only after the referendum, the Russian citizens  will not be able to buy Ukrainian land even after it. "At present, citizens of Ukraine, legal entities of Ukraine whose members are only citizens of Ukraine, territorial communities and the state, will be able to buy land. It is prohibited for foreigners and stateless persons before the referendum", Mykola Solsky, Chairman of the Verkhovna Rada of Ukraine Committee on Agrarian and Land Policy said.

The bill offers limit regarding concentration of no more than 10,000 hectares of land in the hands of one operator. "No Ukrainian enterprise or land owner can own more than 10,000 hectares of land. Regardless of the number of established enterprises, a restriction regarding 10,000 hectares is imposed on them all. To control concentration, the bill provides for synchronization of all registers. In case of exceeding the limit, surplus land is seized by court decision and sold by electronic auction", Mykola Solsky commented.

Apart from that, it will not be possible to purchase land within a 50-kilometer zone near the border. For the purposes of national security, restrictions on the sale and purchase of land will be introduced in all border regions. At a depth of 50 km from the border, Ukrainian companies with foreign investments will be prohibited from buying land, even if a positive decision will be endorsed in the land referendum. In the occupied territories, any agreements are void, except for the inheritance of the land. This means that the sale, transfer to the authorized capital and other ways of conveyance of agricultural land in Crimea or separate areas of Donetsk and Luhansk regions , even if they are certified by shadow Ukrainian notaries, will be declared invalid in accordance with Ukrainian law.

There will be set a minimum land price set below which the land can’t be sold. "This rule is interpreted as a safeguard against fraudulent actions against land owners. Swindlers will not be able to buy a land literally for one hryvnia. Until January 1, 2030, the sale price of land may not be less than their regulatory monetary value (UAH 25-30,000 per hectare)," Tymofiy Mylovanov, Minister for Development of Economy, Trade and Agriculture stressed.

The bill stipulates for the preferential terms for the purchase of agricultural land for farmers. "Agricultural holders who have farms on land that has been transferred to them for permanent use (up to 100 hectares) will have an opportunity to purchase the land by installments during a 7-year period at the NGO price without auctions. Therefore, during this period, the farmer will pay for such land at the level of rent, and sometimes less, and within 7 years at the maximum, it will be his property. Such a request was made during trips to the regions and was taken into account. The area of such land amounts for about 560 thousand hectares by now," said Taras Vysotskyy, Deputy Minister of Economic Development, Trade and Agriculture of Ukraine.

The proceeds from the sale of land will be invested to rural development. Part of the funds from the sale of state and communal agricultural land will be redistributed to a specially established Rural Development Fund. "The Fund's mission is to finance infrastructure development in rural areas, energy conservation, education and healthcare in rural areas; implementation of state programs for the development of small and medium-sized agricultural producers," said Timofii Mylovanov about the innovations.

Banks won’t be allowed to buy the land, but will have a chance to grant loans secured by land. This will stimulate lending to the agricultural sector. If the mortgaged land is expropriated into the bank’s property, the latter must sell it through electronic auctions within 2 years from the date of acquiring of the property right. Otherwise, the land is expropriated from the bank under a special procedure.

State support programs will be offered to agrarians. In particular, for the program for cheaper loans for the purchase of land for agricultural purposes the Government allocated UAH 4 billion, while for the Loans Guarantee Fund – the sum worth UAH 240 million: "It is important for us to guarantee transparent rules of the land market and equal opportunities for everyone who wants to buy land, especially for those who have finite resources - for farmers. There are at least 2 financial support instruments available today - credit insurance and interest rate compensation," explained Tymofii Mylovanov.

Besides, during the event, Deputy Minister of Economic Development, Trade and Agriculture of Ukraine Taras Vysotskyy told about the opening of the coordinates by the State Service of Ukraine for Geodesy, Cartography and Cadastre: "At the beginning of the year the State GeoCadastre opened a new function within the framework of the "Cadastre 2.0. Transparency, accessibility, innovation. Strategy". In this way, certified land surveyors were given access to the data on the coordinates of the turning points of land plot borders." 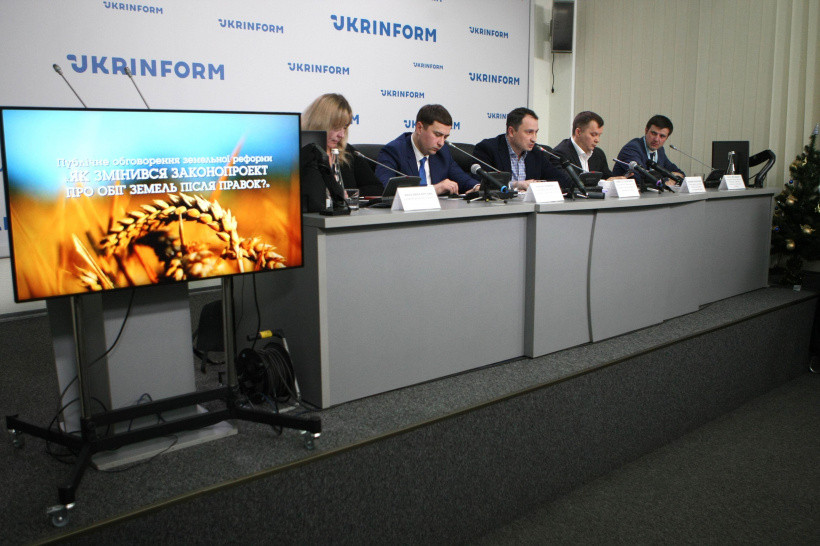 Minister for Foreign Affairs Vadym Prystaiko is on visit to Singapore

By theme «Land and agricultural sector»