On the occasion of the meeting of the Prime Ministers of the „Lublin Triangle”, we, the Heads of Governments of the Republic of Poland, the Republic of Lithuania and Ukraine:

Deplore in the strongest terms Russia’s unprecedented, brutal, unprovoked military invasion against Ukraine. We consider this premeditated attack against a sovereign, peaceful and democratic state as a blatant violation of fundamental principles of international law;

Pay tribute to the victims of war and to tremendous military effort of Ukrainian Armed Forces as well as of the entire Ukrainian nation in defense of their Homeland against this barbaric assault by the Russian Federation;

Recalling the United Nations General Assembly‘s Resolution adopted on March 2 with the overwhelming majority, we:

demand that the Russian Federation immediately ceases all its military operations and unconditionally withdraws all its forces and military equipment from the entire territory of Ukraine within its internationally recognized borders, and returns all troops and equipment amassed at the Ukraine borders, including in Belarus, to their bases of permanent deployment;

demand that the Russian Federation immediately and unconditionally reverse the decision related to the status of certain areas of Donetsk and Luhansk regions of Ukraine;

condemn the indiscriminate use of Russia’s military force against civilians and civilian infrastructure, including schools, hospitals and residential buildings, protected under international humanitarian law.

We call upon international community to further increase pressure upon the Russian Federation, including through further expansion of strong, consistent and long-lasting sanctions policy and by massive practical support to Ukraine which has been fighting in self-defence as enshrined in Art. 51 of UN Charter;

Underline that all perpetrators of international crimes committed during this invasion must be brought to justice; and express strong support for of the International Criminal Court’s prosecutor’s decision to start the investigation. We express full readiness to provide with necessary help in this respect;

Condemn reckless and extremely dangerous attacks by Russian troops on nuclear power plants and nuclear facilities in Ukraine. Such attacks are unprecedented in world history and put the world at the brink of a nuclear catastrophe;

Call on the international organisations, in particular the IAEA and the UN to respond to Ukraine’s demands and ensure safety of nuclear facilities in Ukraine as well as ensure protection of humanitarian corridors for the evacuation of civilian population;

Condemn the involvement of Belarus in this aggression against Ukraine and call on Minsk to abide by its international obligations.

At the same time, we consider that future democratic Belarus has its place among friendly European nations and that the Lublin Triangle remains open to their representatives;

Call upon Russian and Belarusian people to speak up and demand that their governments stop this raw military aggression against neighbouring Ukraine;

Reiterate the non-recognition of the illegal annexation by the Russian Federation of the Autonomous Republic of Crimea and the city of Sevastopol as well as non-recognition of the self-proclaimed „Donetsk and Luhansk People‘s Republics“ and underline our unwavering commitment to Ukraine's sovereignty and territorial integrity within its internationally recognised borders.

Emphasize that Ukraine belongs to the European family and should be offered a status of
a candidate country now, following its bid for accession to the European Union tabled by President of Ukraine Volodymyr Zelenskyy;

Underscore the need for the EU’s independence from the energy resources imported from Russian Federation as soon as possible;

Emphasize the unchanging role of the Lublin Triangle as an ever more important forum of regional cooperation in Central Europe.

Poland and Lithuania express their joint, unwavering support to the democratically elected authorities of Ukraine and the people of Ukraine, who took up the arms in order to defend the sovereignty of their country and the values of the entire free world: liberty, democracy, respect of fundamental human rights as well as the human dignity.

We express our readiness to continue providing support to Ukraine, its government and its people in this existential struggle by every possible mean including economically, by providing military equipment and humanitarian assistance.

Poland and Lithuania acknowledge the European choice of Ukraine and see it as a Member State of the EU in the nearest future. Warsaw and Vilnius underscore that Ukraine should be granted the EU candidate state status immediately and become a member of the EU through a fast-track procedure.

Together we reiterate that since 2013, Ukraine has been paying a high price, like no other European country, for its European and Euro-Atlantic aspirations and its will to consolidate its democracy by adhering to European values.

We underscore that Ukrainian refugees fleeing the war can find a safe haven in Poland and Lithuania, where they are being provided with the necessary humanitarian assistance.

Ukraine expresses its gratitude to Poland and Lithuania for unprecedented level of support and solidarity with the President, Government and the people of Ukraine in their efforts to defend Ukraine’s sovereignty and territorial integrity, for their leading role in holding Russia accountable for its brutal and inhuman invasion on Ukraine as well as for generous assistance to the citizens of Ukraine forced to flee from their homes due to Russian aggression.

Poland, Lithuania, and Ukraine appeal to our partners to undertake extraordinary measures in order to coordinate response to the growing humanitarian crisis at the European level.

As countries of the Lublin Triangle, we stand together, united by our joint heritage and common values, firmly rejecting yet another attempt of Russia, driven by its imperialistic inclinations, unacceptable in the 21st century, to force its will on a sovereign, peaceful and democratic country in the very heart of Europe by means of a military invasion. 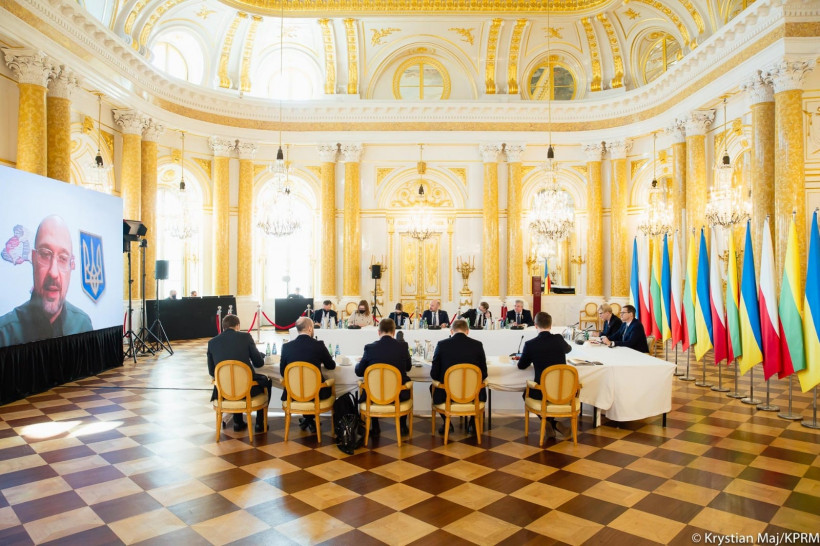 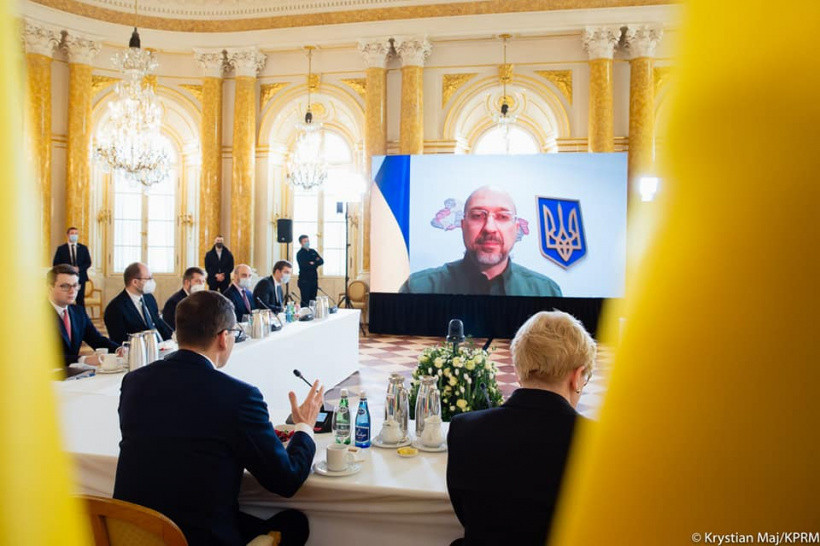 The #MyWar platform kicks off its work