This reform makes local government accountable to the electorate for operational effectiveness and to the Government for lawfulness.

(6/17/2014), On Voluntary Amalgamation of Territorial Communities (2/5/2015), and financial decentralization amendments to the Budget and Tax Codes.

Based on the provisions of the European Charter of Local Self-Government, this process enabled creation of an effective and capable institute of local government on a basic level — amalgamated territorial communities (ATCs). 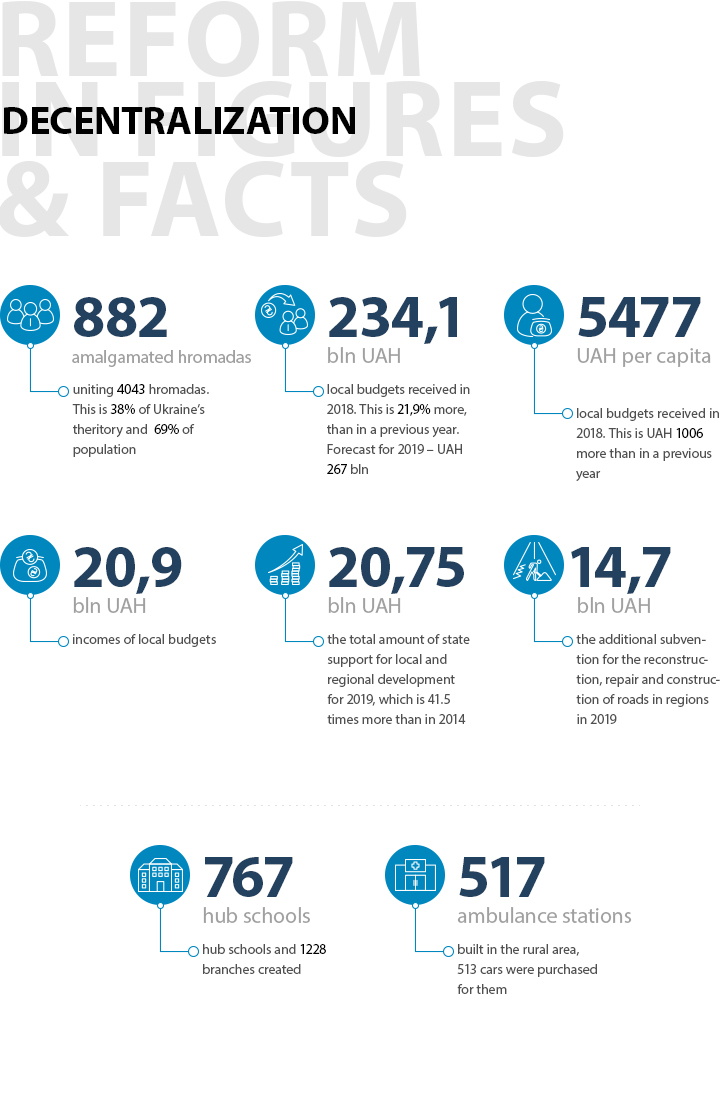 Today democracy is the most popular form of political order of a society enabling people not only to elect but also to control the government.

Despite all the problems facing a democratically organized society and its government and political order, it is the government by the people that best addresses today's challenges.

One of the reasons for rising separatist movements in eastern Ukraine was that there was no political will for a long time to carry out genuine decentralization in public administration. Consequences of the policy of total centralization of government in Ukraine include:

When the reform was starting in 2014, only 6 regions in Ukraine were self-supporting, which caused significant regional disproportions and, accordingly, affected the quality of life and services received by Ukrainians. These challenges called for a radical reform of public administration, local government, and territorial organization of authority in Ukraine.

What does the reform involve?

The decentralization reform gave impetus to the formation of a capable institute of authority closest to a citizen — local government.

The voluntary amalgamation of territorial communities enabled newly created local government agencies to gain respective powers and resources that used to be available to cities of oblast subordination.

Communities are consolidated and amalgamated through voluntary amalgamation based on public opinion. People that consider creating a community must identify resources potentially available to the community for economic and social development and the provision of quality services to the residents.

Effective local government and social and economic development of respective areas that it should secure must be accompanied by an expanding base of resources and finance. Decentralized powers should be supported with adequate resources for effective execution.

This is why local government has received more funding to improve its economic capacity from January 1, 2015, after the Tax and Budget Codes were amended.

Amalgamated communities acquired powers and resources available to cities of oblast subordination, including 60% of personal income tax revenues allocated to ATC local budgets for the exercise of their authority. In addition, tax revenues that remain in full in the local budget include the single tax, the corporate tax on community-owned enterprises and financial institutions, and the property tax (real estate, land, transport).

Besides, ATCs maintain direct inter-budget relationships with the National Budget (prior to the reform, direct relationships were only maintained by oblast and rayon budgets and budgets of cities of oblast subordination), they get respective transfers (grants, subventions for education, health care, and the development of community infrastructure etc.) for the exercise of powers delegated by the state. Legislative changes also entitle local governments to adopt local budgets irrespective of the adoption date of the Law on the National Budget.

Such improvements have already yielded noticeable results. Local budgets' own revenues added about UAH 200 bn from 2014 to 2018 (from UAH 68.6 bn to UAH 267 bn). This constitutes a tangible tool for contributing to results and responsibility for communities' trust.

Apart from expanding financial capabilities, decentralization provides amalgamated territorial communities with other tools for boosting economic development such as borrowing in foreign markets, independently selecting institutions to keep local budget funds earmarked for development and own revenues of publicly funded institutions. Powers in the area of architecture and construction control and improvement of urban planning laws have been decentralized, and local government given the right to determine urban planning policy.

After a number of laws are adopted on decentralization of powers and regulation of land relationships, people will be able to control land outside settled areas. The Verkhovna Rada of Ukraine adopted laws decentralizing part of central government agencies' powers related to basic administrative services such as registration of real estate, business, residential address by passing them down to the community level.

A municipal guard law has already been drafted to provide local government with an effective instrument for administering law and order on its territory. The municipal guard is an entity that will be observing compliance with law and order, addressing the matters of beautification, unauthorized dumps, parking space etc. Under no circumstances may it deal with criminal cases, which are the exclusive competence of the police.

Laws are being drafted to clearly allocate powers in education, health care, recreation, social and economic development, and infrastructure among local government agencies and executive agencies on every territorial level of the country's administrative division.

What has the reform changed already?

Powers and resources produced by decentralization have created for local government new opportunities for developing their territories and creating a modern education, health care, transportation, housing, and utilities infrastructure.

Local authorities have become interested in enhancing investment appeal of their territories for the community's benefit because taxes paid here will be used to improve the locals' quality of life. Authorizations and registration documents required to conduct business can be obtained locally, and communities will be able to raise investments by themselves, using them to boost social and economic development.

Many communities have already felt the advantages of this reform — repairs of roads, medical and educational institutions started in their cities, towns, and villages — all those things that have been in decline for dozens of years.

The reform has given impetus to a genuine development of communities, a change to make living better in every settlement and the country overall, and enables citizens, that is, each of us, to be the owner of the place they live in.

Objective 2: Transferring (decentralizing) executive powers to local government agencies and allocating them between levels and bodies on the principle of subsidiarity.

Objective 3: Creating an adequate resource base for local government to exercise its powers

Objective 4: Creating an adequate resource base for local government to exercise its powers

Objective 5: Streamlining the system of public control and supervision of local government compliance

Objective 6: Developing forms of direct rule by the people such as elections, referendums.

The reform is implemented by