The Association Council noted the ambitious plans of the Ukrainian Government and confirmed the continued assistance of the European Union to Ukraine. In addition, the strengthening of political association, economic integration of Ukraine with the European Union and the concrete results along the way, such as the growth of bilateral trade, were positively assessed.

In a joint statement, the EU noted the significant progress of reforms in Ukraine and stressed the need for their continuation, in particular, in order to create transparent and equal conditions for business and investment activities. The Council welcomed in particular launching the High Anti-Corruption Court, the relaunching of the National Agency for Corruption Prevention and re-criminalisation of illicit enrichment. It  also welcomed the decision of the Constitutional Court which found illegal the electronic declaration of property of Ukrainian public activists.

In a joint statement following the 6th Association Council meeting, the sides separately noted the importance of Ukraine's role as a strategic transit country for gas. Ukraine and the EU underlined the importance of continued implementation of reforms in the energy sector, including to ensure the independence of the energy regulator and Nuclear Regulatory Inspectorate and to create a competitive and transparent electricity market. The document also enshrines importance of the new Gas Directive and ensuring EU Member States’ compliance with common gas rules

The Association Council noted that the Ukrainian Government had successfully stabilized the macroeconomic situation and welcomed the Ukrainian authorities’ steps to open the land market based on the rule of law and the principles of sustainability, transparency, fairness and inclusiveness.

The Association Council noted importance of engaging regions into the European integration and welcomed steps of Ukraine to establish regional offices of European integration aimed at expanding educational, scientific, cultural and business ties with the EU. The sides confirmed the continuation of joint efforts to open the courses of College of Europe (Natolin) in Ukraine for Ukrainian civil servants.

The sides also welcomed of interest of Ukraine to expand participation in the EU programs, namely, Creative Europe Program and the Horizon Europe program.

The EU reiterated its unwavering support and commitment to Ukraine's independence, sovereignty and territorial integrity within its internationally recognized borders and positively assessed Ukraine’s endeavors on the way to peaceful resolution the conflict on the Donbas. The parties strongly condemned the violation of the territorial integrity and sovereignty of Ukraine, which began with acts of aggression of the Armed Forces of the Russian Federation since February 2014.

The EU recalled its position that the duration of economic sanctions against the Russian Federation remains linked to the complete implementation of the Minsk agreements, emphasizing the Russia’s responsibility.

The EU condemned the conduct of so called “local elections” in occupied Crimea, the building of the Kerch Strait Bridge without Ukraine's consent, the opening of the railway link, and the further militarisation of the peninsula as well as of the Black and Azov Seas. The Association Council called on Russia to ensure unhindered and free passage to and from the Sea of Azov, in accordance with international law. 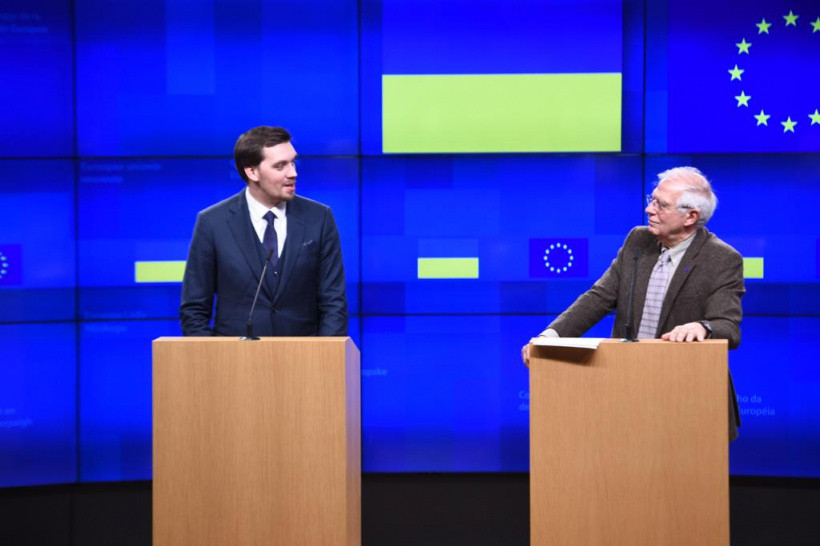 Dmytro Kuleba: European Green Deal is part of the reforms and growth of Ukraine